Owner Keith Clark started surfing in Daytona Beach, Fla. during the early 80’s. After 6 years of Spring Breaks working as waiter, bartender, suntan lotion sales person etc., he realized it was time to get his life together. Not wanting to leave friends and the beach lifestyle he happened to notice an article in surfer magazine entitled ” . . . Surfing The Great White North” and featured a couple of pro surfers wearing shorties and riding perfect overhead glass on the Eastern Shore of Nova Scotia. Nova Scotia??? That’s my birthplace !! Needless to say he packed up his black Cadillac Coupe De Ville (no back windows covered in rust and surf stickers) and was back home the following week.

Keith joined the Canadian Navy in 1990. He wanted to join the army but the recruiter (a naval officer) told him that he could bring a surfboard on the ship and surf were ever he went. After 10 years of service in the Middle East, Adriatic and many other exotic places Keith realized it was time for a change. 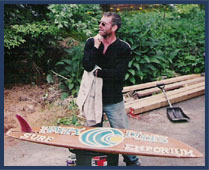 Not knowing what to do with his military training (in the real world) he consulted with his friend Martin Lunn. Martin asked the question what would be your dream job? What else – Surf Shop – in the Hood – the first on the Eastern Shore! There were only a couple of shops in town at the time – over priced, poorly stocked and a long drive to get a bar of wax.

After releasing from the Navy Keith took his savings, bought an old cube van and headed south to Longboard House in Melbourne Fla. – There he met Mike Mann the owner who

graciously helped fill the truck with new & used surfboards, bodyboards, wetsuits and other accessories. After a brief visit with old friends he traveled back to Nova Scotia to start his new venture.

The original location for the shop on Hwy 207 in Seaforth fell through at the last minute. With the help of friends he turned the garage at his home 433 causeway road into a shop. Business was great for the first 2 weeks until all his friends had a t-shirt and then it looked like a long cold winter ahead. Not wanting to give up and having an empty cube van sitting around Keith loaded it up with a few rental boards ,wetsuits etc. and drove it down to Lawrencetown Beach to promote the new but out of the way shop. The rental truck proved to be the bread and butter of the business offering the chance for anyone to try surfing for a very reasonable price.

In 2003 interest in surfing increased ten fold. Keith realized that it was 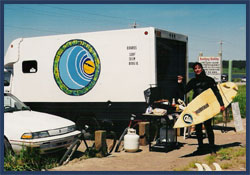 time to move the shop to a better location. Because of zoning laws in Lawrencetown, he found a place as close to the beach as possible on Hwy 207 in Three Fathom Harbour (only 3 km east of L’town Beach). There he built a Shop, Take-Out and Camping Area with plans for rental cabins and maybe a free mini drive in. Stay tuned.